A History of People and Changing Times

The story of Sackville United Church begins in 1790 with the formation of a local Methodist Society. Inspired by the words of William Black, who is credited for sowing the roots of Methodism in the Cumberland area, the Society created a place of worship for themselves with the building of a small chapel in Middle Sackville.

Following a move to the foot of what would become Mount Allison University, a brick chapel(now the fourth building to house the Methodist congregation) was built between 1836 and 1838 and enlarged in 1842.

In 1875, growing numbers led to the removal of the brick chapel and the construction of a larger wooden church building intended to accommodate approximately 400 people. 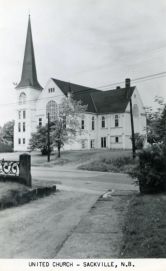 By 1898, a further increase in parishioners (and the mandatory church attendance of the ever-growing university student body) led once again to a rebuilding and enlargement of the church, which could now accommodate 850 people. Considered the “University Church of Maritime Methodism”, its large spire, balconies, four large wings and stained-glass windows led to considerable praise from town and church alike.

In 1925, the congregation chose to enter into the union by which the United Church of Canada was created, and in 1927 and 1928 added a large set of parlours and a Casavant pipe organ to the 1898 building.

By the late 1960s, student attendance was no longer mandatory, and the congregation’s numbers diminished accordingly. By 2000, changing trends in the numbers and demographics of church attendance saw an average of 100 people occupying and maintaining a space built for 850.

Mindful of the history and tradition of our Methodist forebears, who moved locations and changed buildings when they no longer best allowed them to fulfill their mission as followers of Christ, in 2012 the congregation made the decision to sell the building it has occupied since 1898 and explore options for where and how it would continue to worship in a new location.

The congregation was fortunate to acquire the property directly adjacent to its old location, along with the historic brick structure (formerly the Sackville Town Hall) that sits upon it. With renovations to the building complete in May 2014, we have settled into our new church space, and are excited with all that it has to offer as we continue to live out our faith and mission in Sackville.

We are currently one of many churches involved in the SRRC (Sackville Refugee Response Coalition), and are an Affirming Congregation within the United Church of Canada.

Welcome to Sackville Pastoral Charge of the United Church of Canada – you are among friends!

We Gather on Sunday!

We hope you will join us.

*Upper Sackville United will next gather on Sundays April 25, May 23 & June 20th before pausing for the summer.

Watch for updated information should our zone move to a different level of recovery. 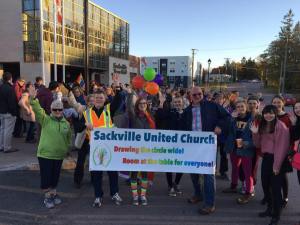 You Can Reach Us:

Do drop in and say hello.